Try a silent (secret) signal. (Kids love the secret part—especially when they have helped create it.) Creating silent signals can be part of “taking time for training” (another great tool card).

My daughter, Mary Nelsen Tamborski, took time for training with four-year-old Greyson about interrupting. (Remember, that time for training takes place during calm times—not at the time of conflict.) They decided on a secret signal and then they practiced. When Mom is talking to someone else, Greyson squeezes her hand to let her know he wants to say something. She puts her hand on his shoulder to let him know she will finish as soon as she can and listen to him. Greyson seldom interrupted after that. It was obvious that he felt pleased about their secret code. 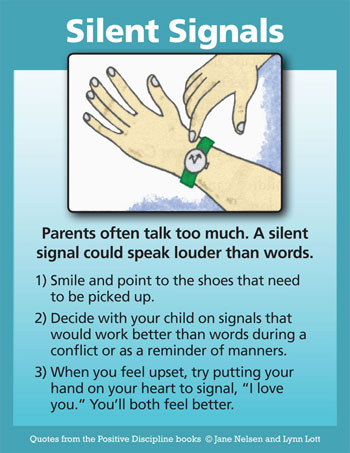 The silent signal illustrated on the Positive Discipline Tool Card is to point to your watch when you have agreed (together) on a specific time that something should be done. Remember to smile while you are pointing.

Following are some more examples of using Silent Signals.


Mr. Perry, a principal, decided to attend a parent study group at his school. He made it clear to the group that he was attending as a parent who would like to learn some skills to use with his own children.

One night he asked the group to help him solve the problem of getting his son, Mike, to take out the garbage. Mike always agreed to do it, but never did without constant reminders. The group gave Mr. Perry several suggestions, such as turning the television off until it was done or giving Mike a choice as to when he would do it. One parent suggested they try the silent signal of turning Mike’s empty plate over at the dinner table if he forgot to take the garbage out before dinner. Mr. Perry decided to try this.

First, the family discussed the garbage problem at a family meeting. Mike again reaffirmed that he would do it. Mrs. Perry said, "We appreciate your willingness to help, but we also realize how easy it is to forget. Would it be okay with you if we use a silent signal so that we can stop nagging?"

Mike wanted to know what kind of signal.

Mr. Perry explained the idea of turning his empty plate over at the dinner table. If he came to the table and saw his plate turned over, that would remind him. He could then empty the garbage before coming to the table. Mike said, "That’s okay with me."

It was eight days before Mike forgot to empty the garbage. (When children are involved in a problem solving discussion, they usually cooperate for a while before testing the plan.) When he came to the table and saw his plate turned over, Mike started having a temper tantrum. He whined, "I’m hungry! I’ll take the garbage out later! This is really dumb!"

I’m sure you can imagine how difficult it was for Mom and Dad to ignore this rebellious behavior. Most parents would want to say, "Come on, Mike, you agreed, now stop acting like a baby!" If Mike continued his misbehavior, they would want to forget the plan and use punishment (which would stop the present rebellious behavior, but would not solve the problem of getting the garbage emptied and allow Mike to learn responsibility).

Mr. and Mrs. Perry continued to ignore Mike’s temper tantrum, even when he stomped into the kitchen, got the garbage, slammed the garage door on his way out, and then sulked and banged his fork on his plate all during dinner.

The next day Mike remembered to empty the garbage and was very pleasant during dinner. As a result of their consistency in following the agreed upon plan, Mike did not forget to empty the garbage for two more weeks. When he saw his empty plate turned over again, he said, "Oh, yeah." He then took the garbage out, came to the table, turned his plate over, and pleasantly ate with the rest of the family.

Another reason it is difficult for parents to ignore rebellious misbehavior is the feeling that they are letting children get away with something. They feel they are neglecting their duty to do something about it. This could be true, if there weren’t some plan or purpose behind the ignoring. Mr. and Mrs. Perry let Mike get away with his temporary outburst (remember, things often get worse before they get better) but since it was part of an agreed upon plan, they solved the problem of continuous nagging over neglected chores.

Mrs. Beal was frustrated because it irritated her so much when the children would come home from school and dump their books on the couch. Constant nagging was not producing any change.

During a family meeting she told her children she didn’t want to yell and nag anymore about this problem. She suggested the silent signal of putting a pillow slip over the television as a reminder that there were books on the couch. The children agreed to this plan, and it worked very well. Mother no longer got involved beyond the signal. When the children saw the pillow slip, they either picked up their own books or reminded someone else to.

Several weeks later, Mrs. Beal wanted to watch her favorite TV program after the children had gone to school. She was surprised to find a pillow slip on the television. She looked at the couch and saw the packages she had left there the night before, when she was in a hurry to fix dinner.

The whole family had a good laugh over this turn of events. They enjoyed this method, and from then on the children thought of many silent signals as solutions to problems.

Mrs. Reed likes to use silent signals in her fifth-grade classroom. She teaches them to her students almost as a second language on the first day of school. One is to have them give her the silent signal of sitting quietly with their hands clasped on top of their desks when they were ready to listen. When she wants them to turn around and sit down during class or an assembly, she raises her right index finger and makes two small circles and then two up and down motions in the air to the rhythm of the words, "Turn around and sit down." She also taught them a signal for quiet during extreme noise. She would clap her hands once. Everyone who heard the single clap would clap once. Then she would clap twice. By now, several students had heard the echo clap of their classmates and were ready to join the response of two claps. Two claps were usually enough to get everyone quiet. Occasionally it would take three claps before everyone would hear and echo with three claps.

As you can see, the Positive Discipline Tool of Silent Signals can help solve problems, help children follow-through and help parents avoid constant nagging and reminding.